(Appearing originally in the July 14 issue of the Oakville Beaver)

From Deerskin to Dolls: 150 Years of Oakville at QEPCCC 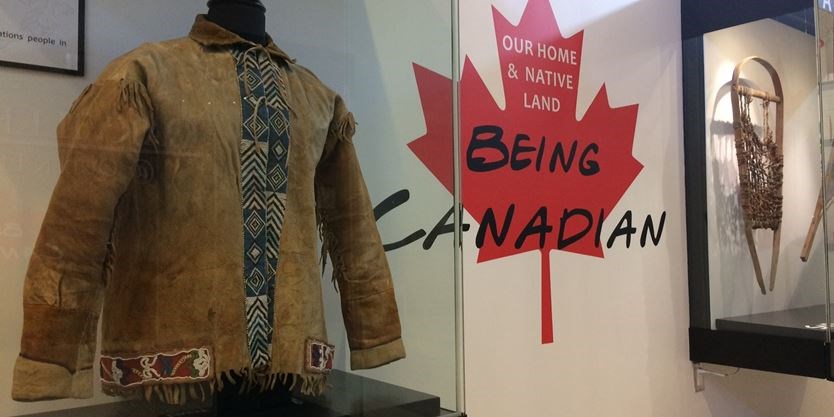 One of the exhibits in From Deerskin to Dolls: 150 Years of Oakville now on exhibit at the Queen Elizabeth Park Community and Cultural Centre (QEPCCC). – submitted photo

“As friends are the family you choose, Canada is the land many of us have chosen for ourselves and for our descendants.”

So reads one of the 110 quotes that line the wall of the Oakville Museum’s Our Home and Native Land: Being Canadian exhibit at the Queen Elizabeth Community and Cultural Centre (QEPCCC).

The exhibit is one of two museum projects currently on display at the QEPCCC.

Our Home and Native Land: Being Canadian, which showcases Canadian symbols and culture, can be viewed until January 2018. The accompanying exhibit, With Glowing Hearts: Celebrating 1967, highlights Oakville’s Centennial celebration of 1967, and will be shown until Sept. 3.

Our Home and Native Land: Being Canadian incorporates Oakville artifacts to highlight seven Canadian icons, each representing a different aspect of our national identity.

From a 19th-century set of Iroquois snowshoes (representing ‘snow’) to a First World War uniform worn at the Battle of Vimy Ridge (representing sacrifice), the exhibit covers a wide range of Canadian symbols and time periods.

Modern Oakville is also incorporated in the exhibit, as the back wall of the display is covered with current Oakville residents’ answers to the question, “What does being Canadian mean to you?” Visitors are also invited to write their own answers on an ever-changing chalkboard within the display.

A short walk down the hall brings visitors to With Glowing Hearts: Celebrating 1967, a more focused exhibit that reflects on Oakville’s commemoration of Canada’s Centennial Year. Featuring unique items from Oakville’s past – like decade dolls dressed in fashion from the 1870s to 1960s, Centennial memorabilia and ‘mod’ dresses — the display gives visitors insight into how Oakville celebrated our nation’s last major birthday.

Also included in the exhibit is the multimedia project 1967: Canada Welcomes the World, a collection of photographs, architectural drawings and short documentaries that highlight the excitement and achievements of Expo 67 in Montreal.

So, as we reflect on the past 150 years of this land many of us have chosen, take some time to see that past with your own eyes at one of these two educational and engaging exhibits.

It’s Canada’s 150th year of Confederation, and Visit Oakville is celebrating with the #MyOakvilleMoment contest. Share your favourite Oakville memories and hidden gems from the past or present for a chance to win one of three prizes.

Ambassador Takeover: How to spend date night in Oakville